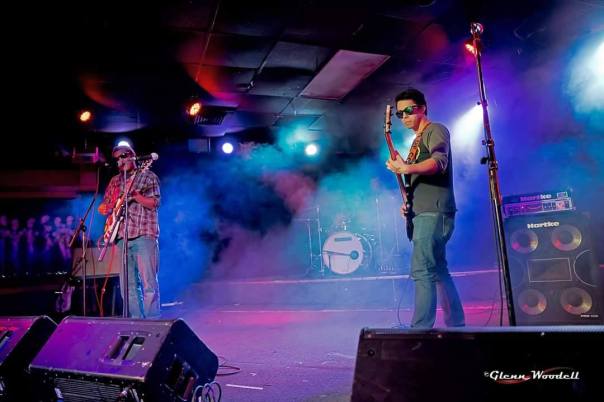 Before I start this blog post I must say that when it comes to this 3 piece ensemble my opinion is biased. I know these guys personally. Let’s just say that I can remember the day my mother brought the lead vocalist home. He was swaddled in a blanket and he was as cute as a button. From that day on, he gave me hell. Pure hell! But, as we got older, I learned to admire his talents and abilities, which leads me to the band False Cape…

Recently, I made a promise to myself that I was going to spend the next few years fulfilling my bucket list. In October of 2015, I was able to scratch off one of my listed items. After admiring False Cape from afar, I was finally able to see them live in concert at Shakas Live in Virginia Beach, where they opened for the well-known reggae artist J Boog.

Since then the Virginia Beach–based band has traveled all over the state performing shows. They are now preparing for their next show in Washington D.C. (January 30th at Mellow Mushroom) where they will perform with national touring Virginia Beach artist Greg Gutty. This is likely to be their biggest performance yet.

Of course, if I wasn’t a million miles away, I’d be the first fan waiting at the door.

Despite the fact that Kris Doucette (lead vocalist and guitar) is my little brother, I must admit that he is not my only reason for being a huge fan. Along with his band members Anthony “Ant” Pitts (bass guitar) and Justin Conner (drums), False Cape is simply a brilliant blend of exceptionally talented musicians that are definitely the next big thing that you will hear.

Here are 5 reasons why:

1. Their Fresh and Unique Sound

With a mixture of funk, ska, reggae and punk rock: False Cape’s sound is a funky mix between the fresh raw lyrics of Sublime, the sultry ska style of No Doubt’s (the early years), and the soulful rhythms of Bob Marley mixed with a hint of the funk-filled tunes of the legendary Jimi Hendrix.

When you see this band you see a unique blend of individuals that defy all musical perceptions and misconceptions.

Occasionally False Cape will perform a song from another legendary musician. They have done covers of artist such as the Beatles and Hendrix. But these seldom sung covers are mixed in with their original songs. These musical pieces of art are special for the band because each member plays a role in the creation and production of the song. Each item of their music is creatively crafted, everything from the lyrics to each note performed.

4. They Got the Funk

There are too many great adjectives that I can use to describe the funky yet ironically mellow sound of this band. Lead vocalist Kris, has a particular way of delivering the lyrics like no other, while his counter part Ant Pitts blasts expressive tunes from his bass guitar. The soulful approach to their ska-rock genre brings an unkempt funk rhythm that is sort of indescribable.

False Cape has an electrifyingly unforgettable stage presence. You will feel their soul in every note played, and in every beat of Justin’s drums.

While any show with False Cape will certainly Rock your socks off, what’s most impressive about this band is their truly humble personalities, their love for life and their love for all things that represent;

… Remember this one thing, only one band was

“chosen by the universe’s music council to end all mortal suffering of horrible music and sent to Earth” and that one band is False Cape.