It all started when I was asked by actress, writer and play director Peppur Chambers to participate in the pre-production of A Streetcar Named Desire. Being every bit of a NOLA girl, I was honored to join the production crew and jump on board as the New Orleans consultant.

Not only was it a way for me to be involved in the art culture of Prague. It also allowed me to do what I do best: talk about the city I LOVE. The city that has reared, shaped and formed me in every way.

I LOVE YOU NEW ORLEANS!

The opportunity couldn’t have come at a more perfect time. Finally  accepting my life living abroad, I was more than ready to work with a team of very talented and accomplished individuals.

It was even more of an honor to participate in the production of a play written by a man who  had such an  impact on the city of New Orleans.

I’m not sure who loved New Orleans more, me or Tennessee Williams. His impact was so strong that there is an annual Tennessee Williams Literary Festival where you can experience all things TW; from literature, motivational speakers, workshops, and the famous “STELLAAAAA” yelling contest.

They say first impressions are everything…

…When I first walked into the venue, Studio Savec, I was instantly excited as the scene in the lobby was decorated in all of my favorite things from home. A little bit of purple, green, and gold; fluffy boas, Mardi Gras beads, and masks were part of the dynamic ambiance. Impressed to say the least, I walked onto a set that took me straight to the Bywater District of New Orleans.

Might I add, one of my favorite parts of the city.

It’s all about the details; shuttered windows, beds draped with sheer curtains used as mosquito netting, old fashioned lamps and the fact that it’s summer time in an aircondition-less Europe, really helped set the mood back to post WWII New Orleans.

I took my seat near the porch where Eunice (Marin Mannies) opened the play as she and the audience is first introduced to a rather disheveled Blanche Dubois.

I felt a thrill when Blanche entered the set. Theatre Actress Nicole J. Adelman demonstrated her skills with perfection. Taking the audience in with her ironic charm. She embodied every strange manipulative yet charming element of the famous delusional southern belle from Belle Reve.

Soon after, we were introduced to the rest of the cast including a pregnant Stella (Laura Strugar-Smith) and her Abrasive husband Stanley (Dave Clark). Throughout the play, Stella, under the  spell of love, tries to manage a life interrupted by her sister and dramatized by the tumultuous relationship between the sister and the man that she loves.

The play went through each act with nothing less than a stellar performance. It was emotional, breathtaking and thrilling with a pinch of comic relief to break apart the serious nature of the play. A comic relief that even Tennessee Williams would’ve appreciated.

I was also taken back by the accuracy of the New Orleans accent. With such a distinct accent of “Yats”, “War-tahs” (water) and “Bay-baes” (baby), I was pleasantly surprised to hear a good balance. While this accent that I’ve worked so hard to get rid of is one that is even harder to perfect; as a native of New Orleans, I think that the cast did a pretty good job portraying locals of that era. 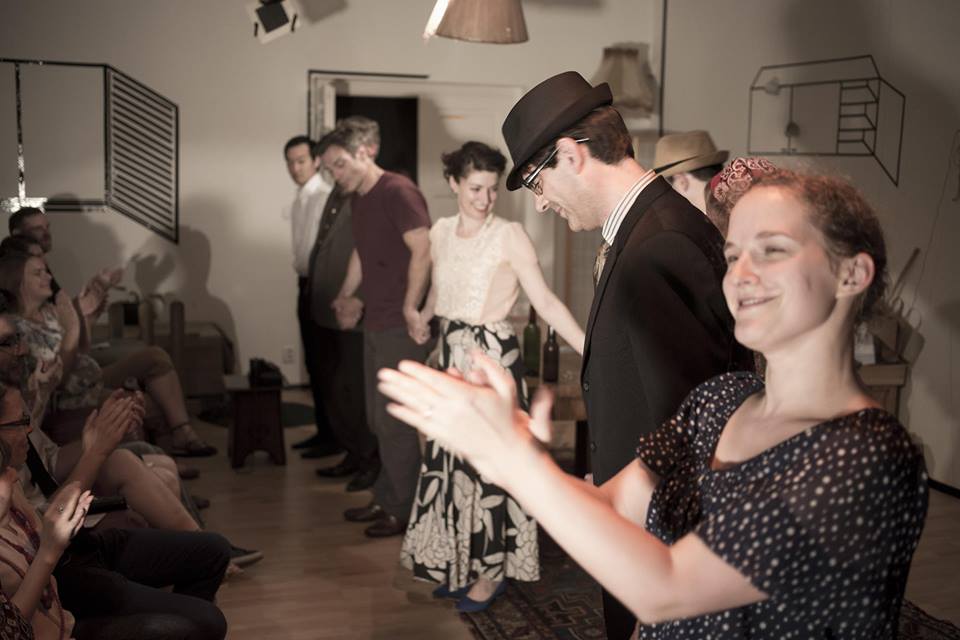 You know what, I must admit that I am always skeptical and a little bit defensive when it comes to outsiders doing things about New Orleans. (Yes I am aware that Tennessee Williams was not from NOLA).

But, I’m not the only one. People from New Orleans are all the same. We love the admiration for our amazing city but at the same time we are always thinking, “IF YOU’RE GOING TO DO THIS, YOU BETTA(H) DO IT RIGHT!”

With that said, I was pleased to see the play in action, I thought it was phenomenal, and I was proud to be a part of it.

The best way to pay homage to the city that I love is to take it with me to Prague, and participating in this production made that homage possible.

LINK: FOR MORE INFO ABOUT A STREETCAR NAMED DESIRE IN PRAGUE